Since spring is in full force here in the valley it is time to turn on your irrigation, get it up and running properly. We found just the man to do that. Tracy is out planting seeds, flowers and trees and not wanting to water it all by hand any longer. I knew it was time to find someone that would come out, open and check our system for us. I came across an ad for Waterbouy and gave him a call. Dave came out, turned our system on for us checked it all out. Along with a new house comes new surprises which Dave fixed in no time. So if any of you are looking for a really good irrigation technician I/we would highly recommend Dave.

Here is his information give him a call!
Waterbouy Keeping it Simple

Dave Polz
Certified Irrigation Technician
250.317.9468
Posted by Steve Higgins at 09:52 No comments: Links to this post

Email ThisBlogThis!Share to TwitterShare to FacebookShare to Pinterest
Labels: kelowna

Hi it's Tracy, Steve's wife I have hijacked his blog today and plan to do so once a month. So please let me know if there is anything you would like to see on here.

Today it will about creating a stylish book shelf.

Did you know that bookcases are not just for books. They are great places to display your favorite pieces whether it is art, vases or whatever it is you like.

Mixing books with other pieces adds interest to a shelf. Try stacking books horizontally for even more visual interest. Display books lined up traditionally with a couple of books horizontal at the end or an ornament.

Try to avoid making things too symmetrical, mix in objects of different heights. Or style by theme: group items by color or function.

Styling a bookcase is easy, make a plan and make it work! You may have to play with it for a bit until you find what works for you. I like to play with it for awhile and when I think I have it just the way I want it. I will take a photo, as I know I will go back and tinker with it a few more times and then not be able to put it back exactly the way I liked it!!
Instead of allowing clutter to accumulate on your shelves, make your bookcases an expression of your home’s style.

Have a Wonderful Day!!
Posted by Steve Higgins at 16:14 No comments: Links to this post 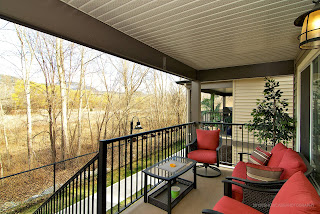 Posted by Steve Higgins at 15:44 No comments: Links to this post

Based on MLS® Active Listings & Sold Units as Reported by OMREB in 2011 for Central Okanagan.
Posted by Steve Higgins at 09:28 No comments: Links to this post

HIGGINS REPORT ON THE MARKET FOR MARCH

HOW’S THE MARKET?
The Okanagan Mainline Real Estate Board reported March sales activity of MLS® property types was down slightly over the same month last year as consumers cautiously enter the market.
Overall sales in the Central Zone for the month of March were down slightly (1.68%) with 351 unit sales versus 357 sold in 2011. When we look at the year to date unit sales the Central Okanagan is up 4.03% with 851 units sold in comparison to 818 in 2011.
Sales volumes of $133 million were down 4.5% from $139 million sold for the month of March last year. Year to date sales volume for 2012 of $318.3 million is only slightly off last year’s pace (2.37%) at $315.8 million.
Noteworthy statistics include Duplex year to date sales up 53.85% and apartment sales up 16.22%. This could indicate that cautious consumers are looking for extra income to help pay the mortgage and similarly choosing smaller more economical housing alternatives such as condominiums. The BC governments introduction of transitional tax rules designed to get new home buyers off the fence may already be working.
OMREB reported the sale of lots up 42.31% (42 sale in 2012 vs. 34 sales in 2011) in comparison to last year to date.
Similarly, the sale of commercial land and commercial real estate is up 200% and 59.09% respectively as investors begin to return to the market.
While it is anticipated that our steady market will reach OMREB’S forecast of 5,000 sales units in 2012 consumers continue to remain cautious and frugal.
This is evidenced by the Average Residential sale price of $439,745 which is down 5.21% over last years $463,915 and the Average Sale Price of all types of real estate sold year to date is also down 3.43% at $338,000 for 2012 in comparison to $350,000 in 2011.
RE/MAX Kelowna Sales Associates continue to work closely with our Seller and Buyer clients to maximize their opportunities and assist them in interpreting the realities of this “new” normal market.
Deborah Moore
Managing Broker
RE/MAX Kelowna


Trading Up: Small Details Create Spring Havens
It's that time of year again when you might feel the urge to purge - otherwise known as spring cleaning. But think twice before trading in some of your home décor items instead, trade them up. By adding small details to what you already have, you can achieve a chic and rejuvenated look for spring.
Before relinquishing boxes of trinkets, "clutter-creators" and damaged accessories, consider repurposing items such as plain lamps and window treatments, tattered pillows and throws, or unused vases and china. Small details help create a spring haven with a fresh perspective and affordable materials such as decorative trim, mirrors and faux-flowers.


Spring Into Home Maintenance: From The Out Side In
Now that the snow has melted take the time to walk around the outside of your home and conduct a thorough exterior inspection. What to look for - damaged sidewalks, clogged storm drains, cracks in the foundation, screen or window damage, damaged or clogged downspouts, deteriorated weather-stripping, loose or missing roof shingles, siding or shutters, and tree limbs that may be hanging vicariously over the home.
Some items, such as foundation cracks or roof and siding problems, may require the hire of a professional contractor to make repairs. The money invested now could save thousands in additional repair work in later years. However, if you are up to the challenge many spring maintenance issues can be easily taken care of by the homeowner.


*Based on MLS® Active Listings & Sold Units as Reported by OMREB in 2011 for Central Okanagan.
Posted by Steve Higgins at 08:44 No comments: Links to this post

A big Thank You to Gospel Mission

For feeding 700 hungry people for Easter Dinner. These people sat down to an Easter dinner of  turkey, ham and all the trimmings. Not all 700 are homeless but with the tough economic times once rent is paid for many of these people they don't have any or have very little money left to buy the extra's they need. On a regular day the Gospel Mission feeds almost 500 meals over breakfast, lunch and dinner. The Gospel Mission also provides clothing for those in need along with overnight hostel beds.
Posted by Steve Higgins at 10:21 No comments: Links to this post

To Summerhill Pyramid Winery for winning Family Enterprise of the Year award!!

In 1986 Stephen Cipes a developer from New York bought the vineyards on Chute Lake Road in Kelowna and decided to make them organic as the pesticides and herbicides used on the property ultimately ended up down the hill in the Okanagan Lake.

Their first vintage of wine was in 1990 and the winery has been going strong ever since. Summerhill's wines have won numerous local, national and international awards. Their organic principles have led to accolades and recognition.

Summerhill has also generated a lot of publicity for its pyramid quirks. On the property there is a replica of an Egyptian pyramid where the wine is stored and aged. Pyramid Power is touted as making the vintages taste better.

I can say we were there yesterday and all the wines we tasted were pretty fine!
Posted by Steve Higgins at 10:00 No comments: Links to this post

Do you have any extra shoes?

Then donate them to Soles4Souls.

Many of the shoes collected will remain in the Okanagan and will be distributed out into the community through local social agencies for example: The Food Bank Store, Kelowna Gospel Mission, Now Canada, and Kelowna’s Women’s Shelter and others will all be offered footwear for their clients and the remaining shoes will be shipped to the Soles4Souls distribution Centre in Nevada where they will be sorted and shipped to where needed around the world.

Belshaw says Soles4Souls Canada started as a little idea three years ago and has grown with help of the community. "It started when the devastating earthquake hit Haiti and I thought I would collect a few thousand pair of shoes. I had a lofty goal of 25,000 shoes and the first day we had 4000 or 5000 pairs of shoes dropped off. We collected 45,000 pairs of shoes the first year, and 65,000 last year and this year's goal 100,000 pairs." We all have 3, 4, 5, 6 pairs of shoes in our closet we don’t wear anymore,” says Belshaw.

“There are 300 million kids in the world without any shoes,” says Jim Belshaw, who makes a living selling and fixing shoes at his Okanagan shop, Roy’s Shoes. “It’s incredible to see the joy on someone’s face when they realize. It’s almost like they can look forward instead of down where they are stepping because they actually have a good pair of shoes.”

Drop of sites and other ways you can help:

A $1.00 donation buys 1 pair of new sandals/shoes. To donate go to http://www.soles4soulscanada.com/how-you-can-help/we-need-your-help/

Organize a shoe drive at a: school, church, your place of business or neighborhood.

About Soles4Souls® – Soles4Souls is a Nashville-based charity that collects shoes from warehouses of footwear companies and the closets of people like you. We distribute these shoes, free of charge, to people in need around the world. Since 2005, Soles4Souls has given away over 7 million pairs of new and gently worn shoes (currently distributing one pair every 9 seconds). The shoes have been distributed in 125 countries, including Haiti, Kenya, Nepal and the United States. Visit www.giveshoes.org for more information.
Posted by Steve Higgins at 09:56 No comments: Links to this post