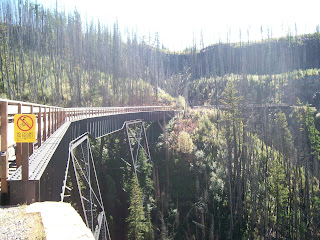 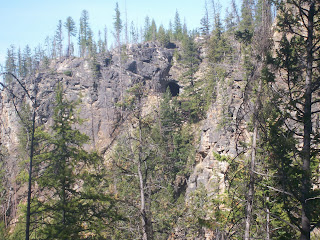 Myra Canyon is part of the Trans Canada Trail, only a short distance south of the Kelowna city limits. The Myra Canyon has 16 wood trestles, two steel spans and two rock tunnels. It is a perfect place to hike or bike and bring out of town visitors. If you have never been you really must go see the beauty the Canyon has to offer, it is breathtaking. The man made tunnels are also amazing,  it makes you wonder how many men, dynamite and days it took to dig through those mountains. Pictured above are two of the trestles. The second picture is the opening of a tunnel.
Posted by Steve Higgins at 11:02 No comments: Links to this post

Busy summer tourism season has helped to drive the jobless rates down to all time lows. With workers retiring, tourists arriving filling up hotels and restaurants businesses felt more confident. All these factors combined helped to push the region's unemployment rates to all time lows. The new Statistics Canada figures showed Kelowna's jobless rate at a rock bottom 4.1 percent in August the lowest in the country.

Five percent is considered by many to be full employment, those who remain without jobs in such buoyant times are either going to find work very soon or have barriers to finding work,  such as no skills, mental or physical disabilities or difficult home and/or personal situations. All good news for Kelowna.
Posted by Steve Higgins at 10:52 No comments: Links to this post

The scammers are at it again this time pretending to be the B.C. Professional Fire Fighter's Burn Fund. If you receive a call from a Mr. McGregor from Greater Victoria asking you for a contribution to the burn fund just hang up on him or anyone one else saying they are calling from the B.C. Professional Fire Fighter's Burn Fund as the burn fund does not participate in any type of phone solicitation made through phone calls.

The fund has learned that several people in the Kelowna area have received such questionable phone calls, do not give out any personal information. If you would like to donate to the B.C. Professional Fire Fighter's Burn Fund the best way is by calling them at 604.436.5617 or visiting their website www.burnfund.org.
Posted by Steve Higgins at 09:57 No comments: Links to this post

Crowsnest Vineyards in Cawston is hosting an Oktoberfest today beginning at 4 pm. The event is held in September to coincide with the original Oktoberfest that happen in Munich.

Everyone is welcome to stop by for some live traditional German music and food such as pork hocks, bratwurst and schnitzel. My favorite being the schnitzel!

The Okanagan Symphony Orchestra is holding a fundraiser at Tantalus Vineyards on Saturday September 15th beginning at 6 pm. The fundraiser will include fine cuisine, wine, musical entertainment and some auction packages will also be available. Chef Roger Planiden will prepare the cuisine, it will be paired with wines from Tantalus.

The Kelowna real estate sales are up and continues to climb in August with sales and dollar values on the rise. Just released figures from the Okanagan Mainline Real Estate Board shows that last month, sales of all kinds residential, commercial and institutional numbered 395 up from 305 in August of 2011.

Now there is something fishy about this festival! Today, Sunday September 9th is the annual Kokanee Salmon Festival. The festival promises to be bigger and better than ever! It will begin this morning at 11 am and go until 3 pm this afternoon. The public can come down to Mission Creek Regional Park and celebrate the return of the kokanee, a land locked salmon. There are a lot of free activities that you can participate in.

Pack up a picnic basket, the family and head down to Mission Creek Regional Park for some fun this afternoon.
Posted by Steve Higgins at 08:16 No comments: Links to this post

Kelowna Community Resources presents it's 15th Annual Okanagan Volunteer Opportunities Fair on Saturday September 8th. The volunteer fair will run from 10 am - 3 pm at the Parkinson Rec Centre which is located at 1800 Parkinson Way in Kelowna.

Come out and visit displays hosted by the 80 non-profit organizations interested in meeting you, sharing their vision and passion for our community. Offering ideas about how you can make a difference. If you have ever want to volunteer but were not sure if it would be a fit for you, why not come down on Saturday and check it out.
Posted by Steve Higgins at 16:06 No comments: Links to this post 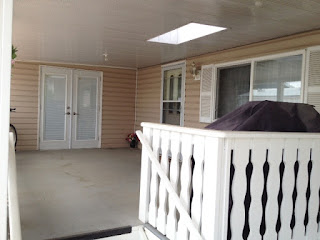 You can find this home at 180-720 Commonwealth Road.
This home is in immaculate condition. ALL NEW appliances including ceramic top convection stove with built in microwave oven & fridge. Laundry rm with new front load washer & dryer. Huge kitchen with tons of cupboards and counter space. Dining area with built in buffet. Large Master bdrm & en-suite with new glass tile shower & good sized closet. 2nd bath is totally updated and has a nice soaker tub. 2nd bedroom has a separate entrance. Spacious Living room and bonus family room with French doors leading to large covered deck. Family room and Office can be used as extra bedrooms. New roof on addition as well as storage shed. Covered carport along with tons of additional parking. Maintenance free yard. Quiet 55+ adult street across from Holiday park with all the amenities. Great for seniors looking for nice sized home in great shape. Boating and golfing nearby. Just move in and enjoy your new home! Call Steve Higgins with RE/MAX at 250-864-7893 for your private showing. Click on link for virtual tour. http://marketing.remaxdesigncenter.com/95/128095/1716950/index.ipv

Posted by Steve Higgins at 08:22 No comments: Links to this post

The second annual Wishmaker Walk will be held on October 13th in Kelowna at the Waterfront Park. The participants are raising money to grant special wishes to kids with life threatening illnesses. Several hundred people turned out last year for the inaugural event here in Kelowna.

Across Canada, the Children's Wish Foundation grants wishes to more than 1,000 Canadian kids each year.
For more information, see childrenswish.ca/wishmaker/
Posted by Steve Higgins at 07:51 No comments: Links to this post