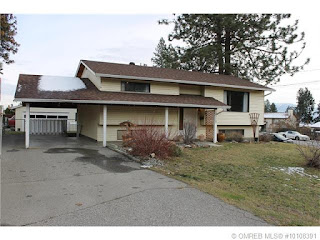 If you are looking for a great family home in nice area, priced around the $400, than look no further. This renovated 4 bedroom, 2 bath home has a huge family room that is currently being used as a bedroom. Covered Carport and 2 Car Garage/Shop with Wood Stove is perfect for your hobbies & Toys. Lots of room for your dog to run in the fully fenced yard. Nothing needs to be done, just move in. Call Steve Higgins RE/MAX Kelowna 250-864-7893 for viewing.
Posted by Steve Higgins at 15:47 No comments: Links to this post

The October Housing Market in Kelowna.

Election fever has finally passed and the winds of change have blown through, bringing with it a tide of ‘Trudeau-mania’. With the new Prime Minister and his cabinet now sworn in, only time will tell what this will mean for Canada. I have to admit that I’m happy to see the end of the political dog fight so Facebook will return to normal.
It’s finally starting to feel like fall in the Valley and there’s soon to be snow falling in the hills. We’ve had an incredible fall this year with great weather and buyers keeping local realtors busy. October was a busy month with there being 355 new listings for the month bringing Kelowna's active listings to 1,683 and 151 new listings for the month bringing West Kelowna's active listings to 886 in total. With the average days on the market for October at 62 in 2015 compared 69 for the same time in 2014.

• Sales are up - Sales increased by 9.4% in October, to 477 listings sold compared to 426 last year. The weather plays an important role in keeping the market active.

• Houses are selling faster – the average number of days on the market has decreased by 3.25% compared to October of last year. There are plenty of well informed buyers waiting for well priced homes to come on the market.

• Lower inventories and eager buyers are pointing to continued strong market conditions as we head into winter. With 2016 expected to be one of the largest mortgage renewal years in terms of dollar values, the last Bank of Canada meeting will be welcome news to many.
Posted by Steve Higgins at 13:14 No comments: Links to this post

BC Housing demand to Ease going into 2016

The British Columbia Real Estate Association has released its 2015 Fourth Quarter Housing Forecast Update. The Multiple Listing Service residential sales in the province are projected to surpass 100,000 units this year. This level of home sales will be the third strongest on record and mark the first year since 2007 that BC home sales exceed the ten year average. After climbing 15 per cent in 2014 and nearly 20 per cent this year, BC MLS  residential sales are forecast to decline 7 per cent to 93,700 units in 2016.

Less latent pent-up demand and gradual upward momentum of mortgage interest rates is expected to ease housing demand next year  The inventory of homes for sale is now at its lowest level in nearly eight years. Sellers’ market conditions are prevailing in many communities and causing home prices to be pushed higher. The average MLS residential price in the province is projected to increase 10.2 per cent to $626,000 this year and forecast to slow to a 2.2 per cent increase at $639,700. Total housing starts in the province are projected to reach over 30,000 units this year, the highest level of production since 2008. Capacity constraints and an edging back of consumer demand is largely behind a forecast decline of BC housing starts, with it being forecasted to about 28,800 units in 2016.

Posted by Steve Higgins at 14:40 No comments: Links to this post